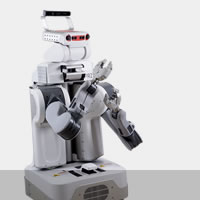 The trend of robotic technology development gradually moves to health-care robots and service robots. This is a new era that robots will walk into our lives. To develop robots that can serve human beings, this research center first devotes to developing health-care robots, aiming at easing the burden of doctors and nurses, promoting the qualities of patients’ lives. At the same time, we aim at preparing for the upcoming ageing society of Taiwan.

After our survey, for robots to serve human being, they first need to know the objects in the environment, that’s why semantic map come out. Semantic map records the objects in the environment, their position and related object knowledge. With semantic map, robots are able to retrieve the object in the map quickly and properly use the object. To build a really useful robot, we need lots of functions, including SLAM, navigation, perception and manipulation. If we have to implement every function on our own, it'll cost lots of time and resources. So we use ROS to help us develop useful robots. Although there’re lots of tools in ROS, object recognition tools are relatively immature such that robots cannot recognize most of objects in our daily lives.

If a robot can only recognize a few objects, only these objects can be stored in the semantic map, thus the map only contains a few objects. Since robots cannot manipulate and use the unknown objects, thus limits the ability of robots. As a result, to make robot complete all kinds of tasks, first we need to let robot be capable of recognizing all kinds of objects. So, now we focus on developing fast, large-scale object recognition function needed by useful service robot.