For the past few years, governments of Taiwan and France have emphasized on transforming the research results into the beneficial motive for the state economy. Both of the countries rely on SEMs mainly and have the corresponding innovative abilities and techniques. Based on the present cooperative results and the exchange relationship, the promotion of cooperative stage and state economy could be done by facilitating producing study cooperative connections. 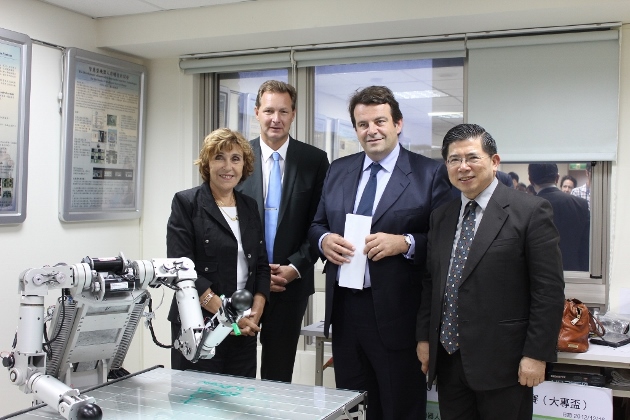 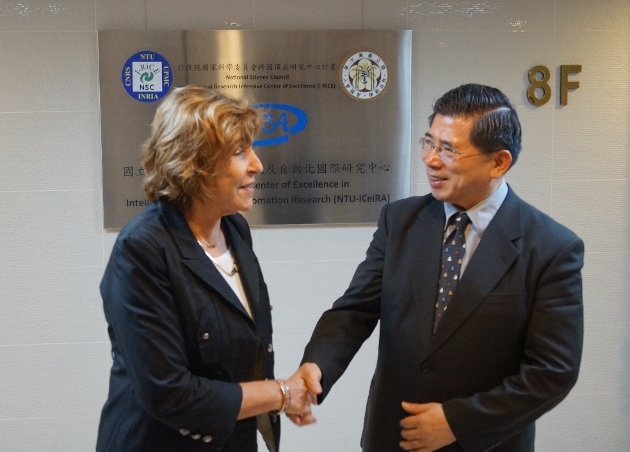 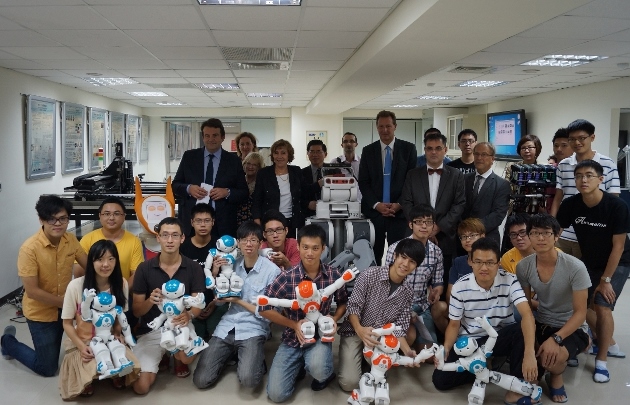 Former Prime Minister Edith Cresson, leading French senior official delegation, voluntarily requested Ministry of Foreign Affairs NTU for visiting International Centre of Excellence on Intelligent Robotics and Automation Research (NTU-iCeiRA) on September 30th. The visit of the delegation was meaningful because through holding the ROC-France technological cooperation round table conference, we were looking forward to restarting the dialogue mechanism on technology between Taiwan and France senior officials. Moreover, the conference also could contribute to the entire promotion of technological cooperative relationship in industry, bureaucracy, studying and research.

NTU-iCeiRA, visited by former Prime Minister Edith Cresson, was established by Prof. Ren C. Luo and under the project of I-RICE. Prof. Ren C. Luo received Phd degree from the Technical University of Berlin and was an engineer in Berlin. Now, he is a distinguished professor in the department of Electrical Engineering at NTU and plays an very important role for integration and promotion in intelligent robot field.

Co-operators of NTU-iCeiRA are CNRS, INRIA and UPMC which is also called the 6th university of France. To establish multinational top research center, NTU-iCeiRA could rely on their high quality academic standard and experience of closed cooperation with the industry and technology transfer of research result. This is a very important model for SRB of Executive Yuan to adopt intelligent automation and robotic academic research and industrial development.

NTU-iCeiRA plays an extremely important role because the research centre is co-established with three important institutions which are National research centre,National laboratory and UPMC. Therefore, there are three main points to set up iCeiRA:
1. Cooperation with European
2. Cooperation among three French institutions
3.Close alliance with industrial circle. To promote the industry in Taiwan, especially with the partners from French research institutions, the cooperation has crucial guiding effect.

The newest research focus on the fields below and the technology needed:
(1) Medical and health care robot: The R&D of intelligent massage robot human-machine interaction-humanoid robotic arm control and application and rehabilitation robotic system
(2) Personal Robot (PR): Robots with the capacities of avoidance, location and human-machine interaction, etc.
(3) Educational and entertainment companion robot: Through the information of the facial characteristic, robot can detect most of the people’s motion environmentally so as to give appropriate reactions and to achieve the object of human-machine interaction. The functions including child care in kindergarder, gender recognition and children’s educational games, etc.

NTU-iCeiRA integrates academic research and essentially technological application, providing the industry practical demand and exchange platform. After achieving the goal of research and development and technology integrating, NTU-iCeiRA plays a role of producing study research centre and technology transfer cnetre, combining the sources of the industrial partners to accelerate the development of the domestic industry of intelligent robot .In terms of technology transfer, iCeiRA transferred technology to PMC and proceeded intuitive robotic arm teaching this year. This cooperation assisted the companies to realize the intuitive robotic arm teaching and the reappearing technology. It also provided the technology of system integration and automated assembly line the companies need and then transforming the innovative technology into the popular product and services.

Now, NTU-iCeiRA has signed MOU with about 25 companies and important institutions such as ITRI, III, PMC, MIRDC, HON HAI, NI, FAULHABER, HIWIN, TECO, CCI, ADVANTECH, VICTOR TAICHUNG, etc. Domestic and international heavyweight companies expect to exhibit the synergy of explosive force to accelerate the development of the research standard of intelligent robot and automation and assist in industry transformation and upgrading so as to increase the international competitiveness.