Biped walking robot realizes locomotion by its pair of legs with walking gaits similar to human beings. Because of these dynamic characteristics, compared with wheeled robots, biped walking robots possess a variety of merits, such as the capability of locomotion on irregular terrains and higher affinity to humans compared to wheeled robots. A problem that biped walking robots usually confront is unknown perturbation from the environment and human beings, which may seriously jeopardize the walking stability. The purpose of this project is to develop a system which takes advantages of the inner stability and posture change of the biped walking robot to make it capable of dealing with unexpected external disturbance and returning to its stable state. 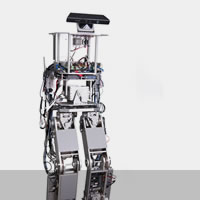 The biped walking robot as a service robot in the future is supposed to work in a human living environment. When the robot moves in a complicated environment, it is highly likely for the robot to endure a variety of unknown disturbances from its surroundings. Under unexpected external force, the walking state will be changed in a short period of time, including its velocity, position, angular momentum, and etc., and the robot may diverse from its stable walking state and fall down. This work hopes to analyze the extent to which the robot can tolerate perturbations and if the perturbation exceeds the tolerance, what strategies should be adopted to overcome it and recover to stability. We hope that based on this proposed stability control system, the real biped walking robot can overcome perturbation in its walking process.